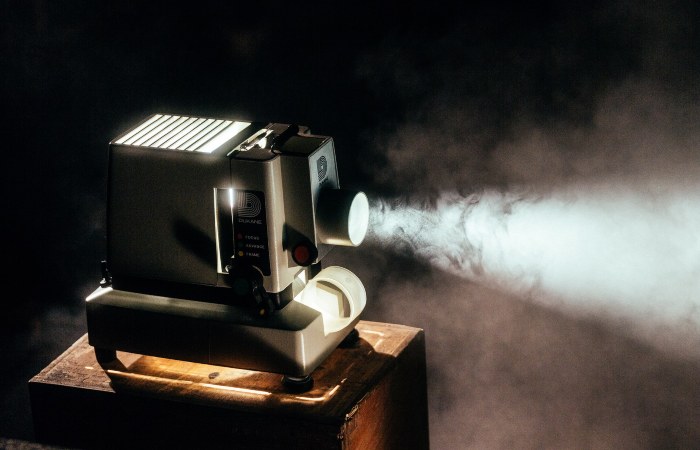 Watching movies on a projector is a surreal experience and it’s hard for any modern TV to compete with it.

Suppose you’ve missed watching some spectacular movies in the theater. In that case, watching them on your projector is the right choice.

Hence, in this article, we’ll cover the 7 Best Movies to watch on Projector. Because watching it on your smartphone, laptop or TV won’t do the true justice to these gems.

7 Movies to Watch on a Projector

As far as great storyline, excellent cinematography and enticing film score go, it’s hard to beat the 2nd movie from The Dark Knight trilogy. Based on the Batman and a popular comic character, The Joker, it offers a brilliant execution of modern cinema loved by critics and mainstream audiences alike.

With the team of Christopher Nolan, Hans Zimmer, Christian Bale and Heath Ledger, the movie worked its magic through its practical visual effects and superb acting from the main and supporting cast.

Your projector will do true justice to the bank heist scene, truck flip scene and the Joker blowing up an entire hospital building; the movie doesn’t leave a stone unturned to leave its magic on you.

If you’ve bought a new projector, I highly recommend that the first movie you watch on it be The Dark Knight.

It has the perfect mix of action, emotions and great storyline. Being a spy action thriller movie, Fallout has a bunch of action scenes to keep your appetite full and more importantly, chase scenes, be it on building rooftops or the helicopter chase scene towards the end.

More importantly, when you know that Tom Cruise loves to do most action scenes by himself, the movie feels much more worthy than it is.

I was a kid when I first watched Terminator 2: Judgment Day on a small, boxy, 21-inch CRT television screen and the movie looked incredible on that too. I was gawking with exceptional visual and practical effects that I hadn’t seen before.

Cut to today, and the movie has aged brilliantly. It had spectacular visual effects for its time and stands true even today. If you have no clue about this movie, do watch it for the adrenaline-pumping truck chase scene that is etched in the memory of every ’90s kid who has watched it.

Terminator 2: Judgment Day is an action movie classic that shouldn’t miss and the full justice to this movie will be done on a worthy projector.

Skyfall was the first James Bond movie I ever watched and was blown away by it. Daniel Craig fit the role perfectly and was pitched against a worthy antagonist played by Javier Bardem.

Again, being a spy action thriller, this movie has several chase sequences, one being over a train, which is incredible to watch. The scene I love the most comes towards the end, during the climax.

With practical effects and an amalgamation between superb cinematography and sound effects, Skyfall lives with you even after several days you’re done watching it.

If you’ve never seen a James Bond movie before, I’d suggest starting with Skyfall, and what’s better than watching it on a big screen in the comfort of your home.

Get Out is a psychological horror movie and an interesting take on the genre. The movie starts slowly and it is hard to believe the roller coaster ride you’ll be in for.

As far as horror movies are concerned, Get Out has incredible visuals, long shots and a brilliant background score that will only do justice on a big screen.

While watching the movie, you’ll get the idea that everything you see on screen can’t be trusted. There are literal clues that hint at what’s coming and is most enjoyable on a large projector screen.

Set in a dystopian future, Blade Runner 2049 surely has the best cinematography and visual effects I’ve seen. Testament to this, the movie has won Oscars and British Academy Awards in the ‘Best Cinematography’ and ‘Best Visual Effects’ category, respectively. Hence, to do full fairness, watching this movie on a big screen with high-quality home theatre speakers is recommended.

In terms of storyline, this movie is a slow burner, and the 163 minutes of running time can be enough to test your patience. Although, the amazing visual effects keep you hooked and show the dark side of technological advancement. It also has several action scenes that work in tandem with the story’s advancement.

Blade Runner 2049 is not my favorite movie, but it’s an incredible movie that cinema lovers shouldn’t miss, and the full justice will be done only on a big screen.

7. Harry Potter and the Prisoner of Azkaban

The visual effects are accompanied by exceptional sound design that sets the mood and keeps you glued to your seat of what’s to come. The movie premise is set superbly and is possibly the best movie in the 8-film Harry Potter franchise.

If you’re planning to rewatch the entire Harry Potter franchise, I’d recommend getting a good-quality projector to make it a worthwhile watch.

If you’ve bought a brand new projector and are looking for the movies to get started, these seven movies will be the right fit.

Do note that some of these movies are installments from a movie franchise, and the whole storyline might connect correctly if you start watching the movie between a series.

If you have other recommended movies, you must watch them on a projector, then leave them in the comment box below.

TL;DR here’s a list of all the 7 best movies to watch on projector: